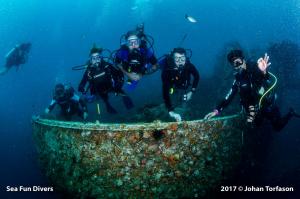 The King Cruiser was originally an 85 meter passenger ferry from Phuket to Phi Phi. On the 4th May 1997 the King Cruiser strayed off course and hit Anemone Reef. The ship sunk in less than one hour with all passengers making it safely off.

Years later the King Cruiser wreck provides the Phuket diving community with a great wreck with a huge amount of marine life to investigate.

Check out huge schools of lion fish, rare nudibranch’s and the odd turtle. The wreck it self is very interesting but unfortunately is collapsing each year, making it not safe to go inside.

During the monsoon months in the last 2 years, the top and passenger decks collapsed and created a “wreckage” out of our Wreck!

A resident turtle has moved in and live underneath the wreckage, and school of rabbit fish, travellies, and snappers are among its neighbors. Also found here are larger in size porcupine fish, common lionfish, and scorpion fish blending into the hul.

Visit The Dive Sites Of Phuket

We can help you with all the details and give you the information you need and want.